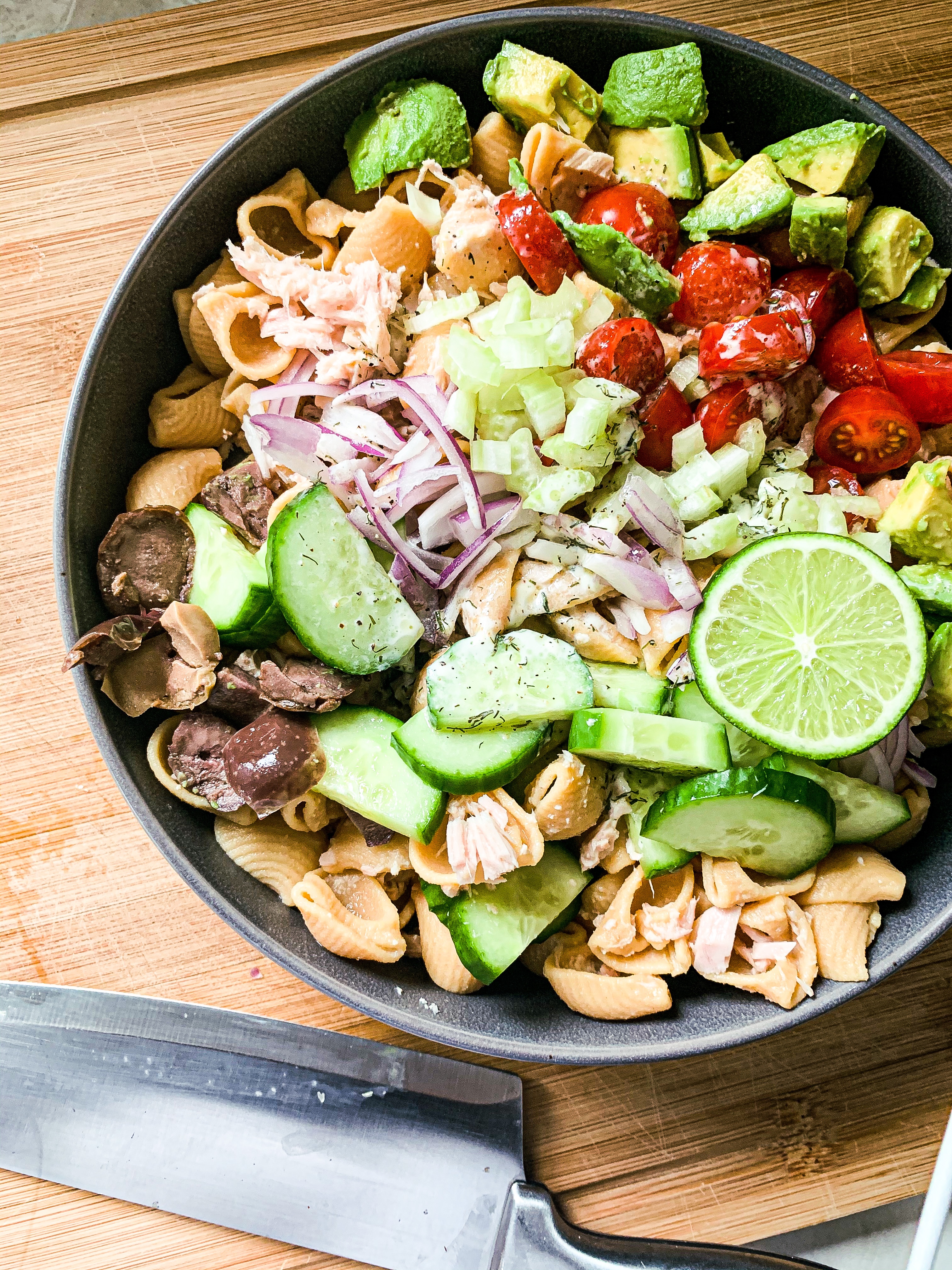 This tuna chickpea pasta salad is packed with protein, fresh veggies, and loads of flavor. It makes for a perfect lower carb, high protein lunch idea that you can make ahead and enjoy on the go.

When I first had the idea to make this, I had regular pasta salad in mind. I had chickpea pasta on hand so I decided to test it out and it turned out so tasty. It contains a lot of protein, healthy fats, and delicious crunch from fresh vegetables. Lastly, a creamy lime dressing completes this pasta salad and adds incredible flavor.

This dish is one of the easiest pasta salads you can make. The steps in making this pasta salad are:

After cooking the chickpea pasta, all there is left to do is mix all the ingredients together. I found that refrigerating this pasta salad for at least 1 hour before serving resulted in the best flavor.

Place pasta salad in an airtight container and refrigerate for up to 2 days. Do not freeze or leave at room temperature.

Yes! You can double, triple, or quadruple this recipe. Don’t make more than can be eaten in 2 days because this pasta salad can’t be frozen. 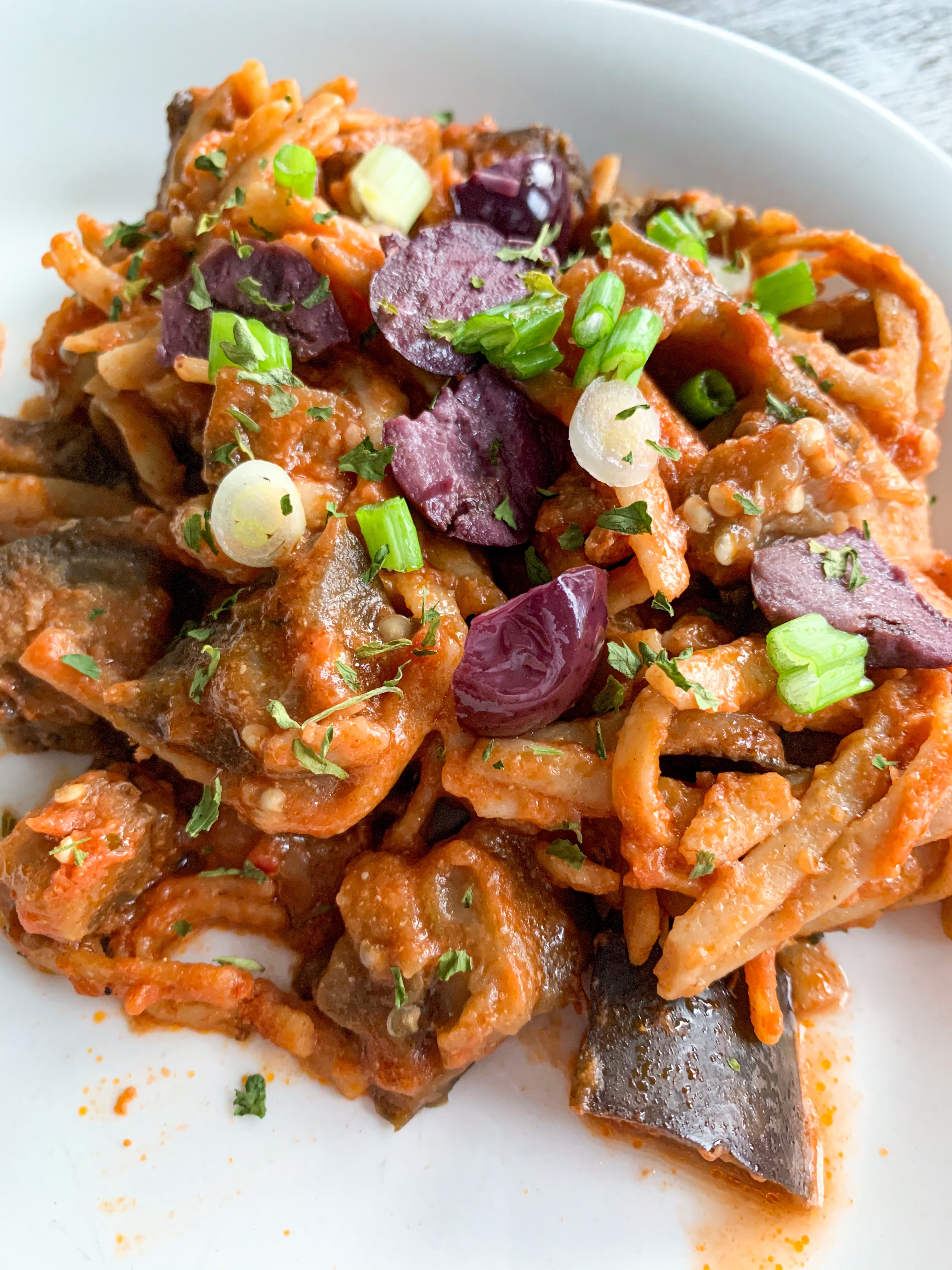 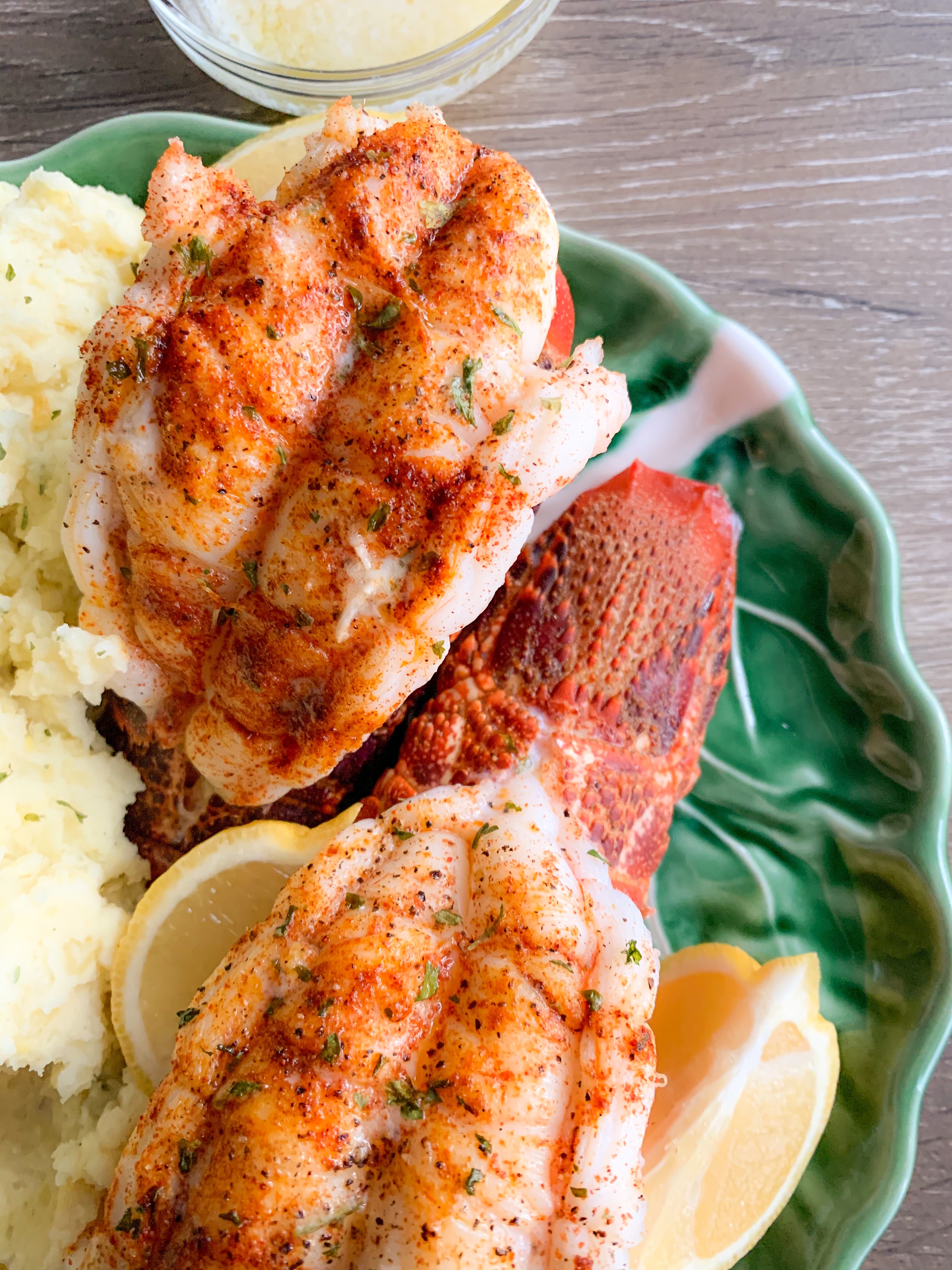 Lobster Tail sounds like a fancy meal you can only eat at a restaurant made by a professional chef. However, if you follow the easy steps below, you will be pleasantly surprised at just how easy it is to make Baked Lobster Tail in the comfort of your own kitchen.

This recipe for Baked Lobster Tail is a fun way to make something fancy at home f dinner without dedicating a lot of time to prepare and/or clean up. You will be amazed at how simple it is to make and it tastes incredible.

There are several ways to make Lobster Tail, however my favorite is baking it in the oven. I have found that this way, you get a nice smokey flavor from some of the seasonings, has a better texture, and it will not have the fishy smell.

How to pick out the best Lobster Tails:

It is much better to buy fresh over frozen however frozen Lobster Tails can be just as good. If buying frozen, make sure that your Lobster Tails are not soaked in sodium tripoyphosphate. Look out of any discoloration on the meat or the shell and avoid those if you can.

To thaw Lobster Tail that has previously been frozen, leave the frozen Lobster Tail in the refrigerator overnight. For quicker thawing, place Lobster Tails in a sealed bag and place in hot water for about 30 minutes or until the Lobster is no longer frozen.

Lobster Tails are sold in the shell. In order to make the cooking process easier, remove the lobster meat from the shell. To do so, cut the shell in the center using a sharp knife or sharp scissors. I found that it was easier to use scissors.

How to Make the Topping:

You don’t need anything fancy to season your Baked Lobster Tail. All you need is butter, salt, pepper, paprika, and parsley flakes. Whip the butter and seasonings in a small bowl and spread it evenly along the two Lobster Tails. While some recipes call for garlic on the Lobster Tail, I prefer the garlic in the dipping garlic butter for better flavor.

If you’re still in shock at how easy the recipe for Baked Lobster Tails is so far, I won’t disappoint you here. Baking is just as simple and it doesn’t take a lot of time either. Place your prepared Lobster Tails on a baking sheet. Before you place Lobster Tails in the oven, make sure that your oven is preheated to 450F and bake for about 15 minutes. The baking time will vary on the size of your Lobster Tail.

You will know when your Lobster Tail is cooked when the meat turns white or pink, becomes firmer, and the shell turns bright red. If the lobster still has gray spots, it needs to cook longer. The general rule of thumb if using a food thermometer is that Lobster should have internal temperature of about 135F-140F when cooked.

Do not overcook Lobster Tails because you will be left with a tougher and gummier texture.

How to serve Baked Lobster Tail:

Lobster Tail is served immediately after it has been baked to perfection. It is commonly dipped in a Garlic Butter Dipping Sauce and served with potatoes, veggies, or a salad. 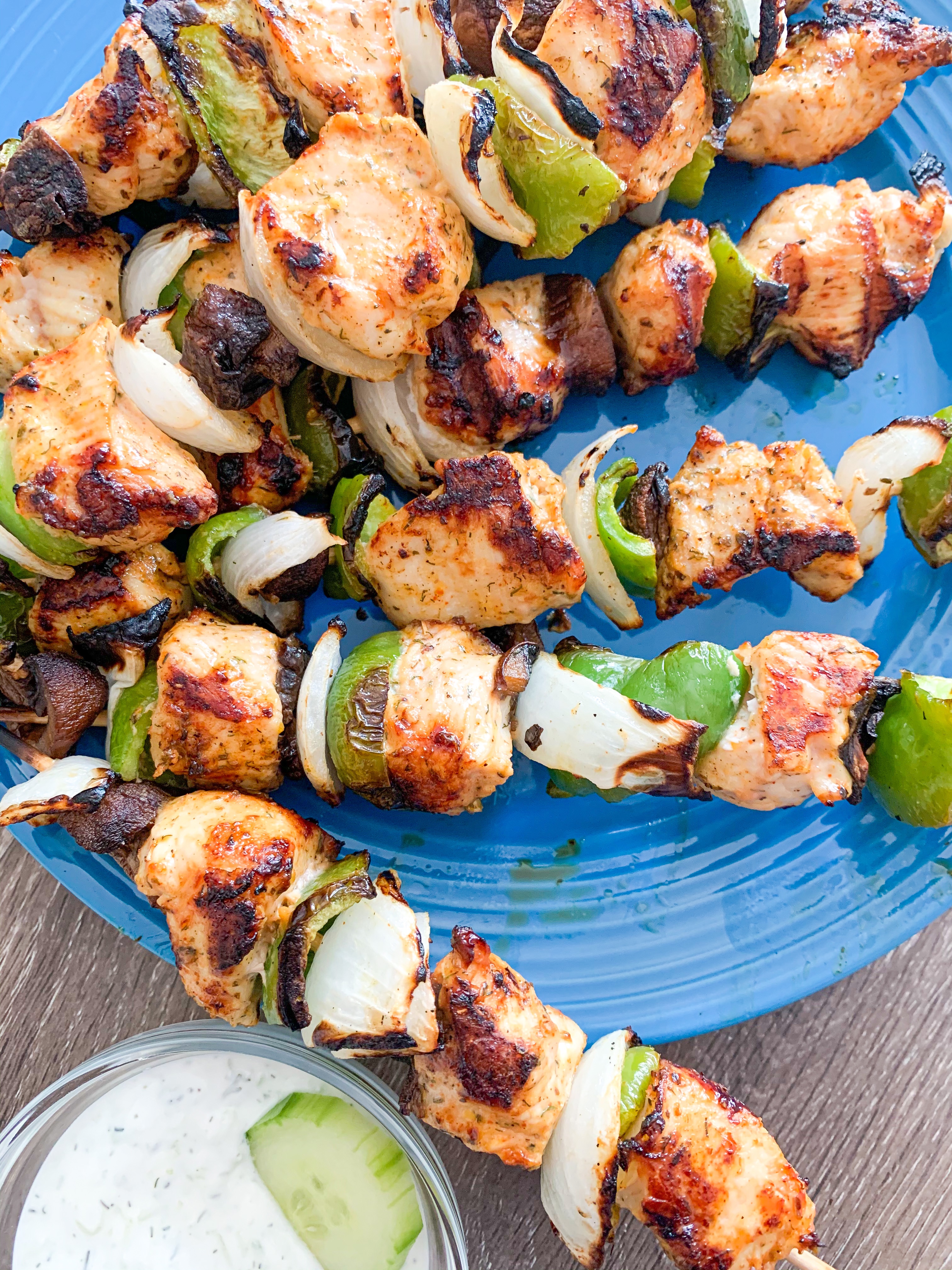 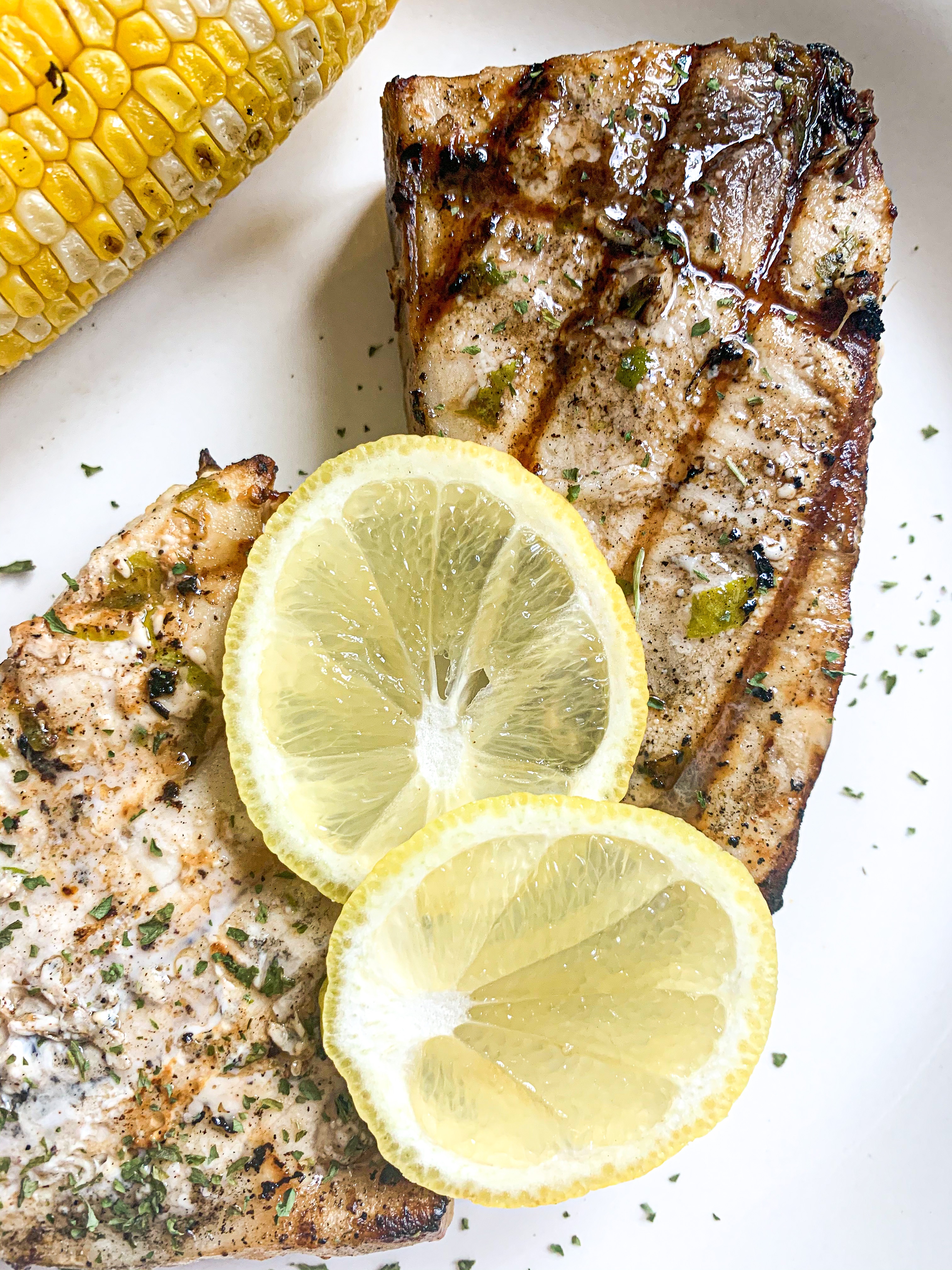 This Swordfish Recipe is so tasty and it cooks so fast, you’ll never regret making it. If you’ve never tried swordfish, know that this fish has a firm, steak-like texture that’s very different than most types of fish. Due to its thickness, roughly 1 inch thick, it’s perfect for grilling because it doesn’t fall apart.

Most say that it should cook for about 3 minutes on each side on high heat, however, I have found that it may need to cook longer if the fish is thicker. Grilling for 3 minutes may leave the fish slightly pink in the center, although that will cook through even after you remove it from the heat.

Once ready, the fish should still be firm and should flake easily when pulled apart with a fork. 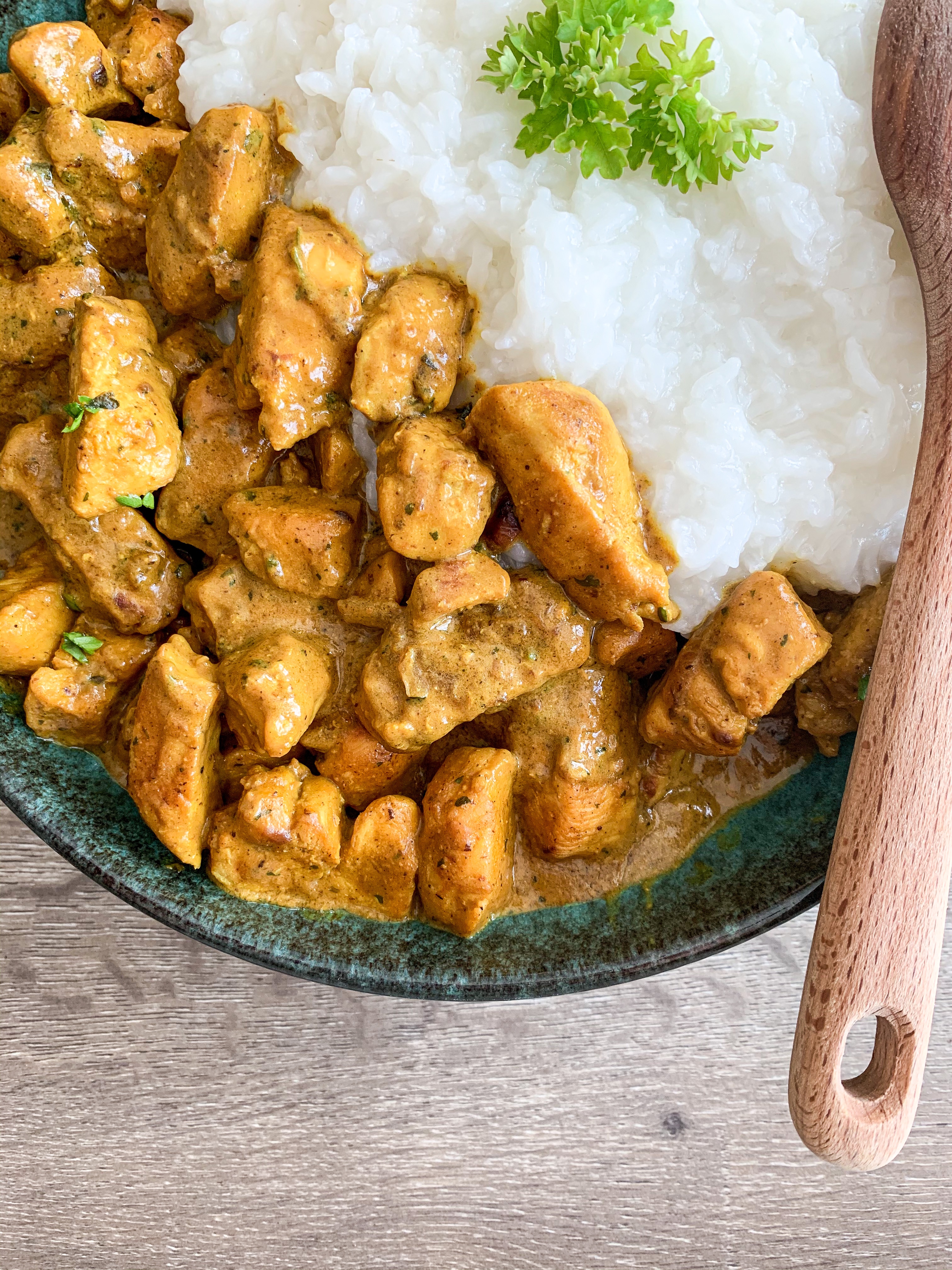 The reason why this EASY 30-minute Chicken Curry recipe is a family favorite, is because it has minimal ingredients yet a bold taste that’s perfect if you’re looking for a different way to have fun preparing chicken. Unlike many other Chicken Curry recipes, this one does not call for a long list of spices and it does not include a blender (another tool to clean up), yet it delivers magnificent taste every single time. Although authentic curry involves a lot of different spices, this Chicken Curry recipe is the closest to authentic that you can get without all of the extra ingredients yet just the right amount of the main ones that make up the distinct curry flavor.

What is Chicken Curry:

Chicken curry is an Indian dish made up of diced cooked chicken drenched in a creamy and rich curry sauce. Curry is a a name for many Indian dishes that use a great variety of herbs and spices. The most commonly used of those herbs and spices in curry are turmeric, cumin, ginger, and coriander along with many more.

What makes my recipe different:

How to make this EASY 30-minute Chicken Curry:

Making the curry sauce: To the same skillet used to cook the chicken in, add more oil if needed, then add chopped onions. Cook the onions on medium low heat until they are soft and translucent. Once soft, add minced garlic cook for another minute or so. Be careful not to burn the the onions and garlic. Next, add the butter and once the butter has melted, add in the tablespoon of flour and whisk until you get a thick paste. Then, add in the whole milk, turmeric, parsley, ginger, salt and pepper. Let the curry sauce simmer on low heat for about 3 minutes. The mixture will thicken as it simmers and even more so as it cools. Lastly, add in the cooked chicken and let it simmer for another 5 minutes. At this point, you are ready to serve and enjoy the EASY 30-minute Chicken Curry!

Changing the consistency of the sauce:

Whenever you make a creamy sauce, even a slight variation can change in the flour to liquid ratio can alter how thick or think your curry sauce is.

To thin out the sauce: add a splash of milk. Add only one table spoon at a time until your sauce has become thinner.

To thicken the sauce: add 1 teaspoon of flour. This part is a little trickier.  Adding the flour directly in the sauce might make your sauce lumpy from the flour. To ensure a smooth curry sauce, mix in 1 teaspoon of flour with 1 tablespoon of milk in a small bowl. Once the mixture is completely smooth, add that to the sauce. This sounds counterproductive since you are also adding milk to thicken the sauce, but that is not flour to milk ratio is not enough to make your sauce runny.

Great side dishes to enjoy with chicken curry:

Make ahead and reheating instructions: